Le Mat is a very special perfume by an Italian niche brand called Mendittorosa which, despite being out there for only a couple of years, has a remarkable constellation of virtues and qualities that would put many niche brands into a devastating state of jealousy and envy. Sheer dedication and hard work invested in every perfume, rich and variant Imaginarium of ideas and images that follow and enrich every new creation, a total absence of desire to follow what’s in or trendy, withholding high level of integrity and refuse to become a sellout. An ideology that is unimaginable and unreachable for the perfume scene of now, at least its commercial part, which becomes less and less relevant with each day passing. The major role in all that is the crystal-clear vision, unyielding character and unusual spirit that Stefania Squeglia, the founder and creative director of House Mendittorosa has.

Talismans is a beautiful and distinguished limited collection that is made out of few perfumes (extrait de parfum actually, which is a highly concentrated formula with 25 percent of fragrant oils as opposed to for example average eau de toillete with 10 percent or eau de parfum with 15 percent): Osang, Sirio, Nettuno, Sogno Reale and Le Mat. First of the bunch that broke the ice was Sogno Reale, while Le Mat, perhaps unfairly, because others perfumes from Talismans collection are amazing as well, got all the attention due to a five-star rating that Luca Turin gave to him, an honor which only a dozen perfumes were bestowed upon. Luca also included Le Mat in his famous top lists, in this case, top 10 retro perfumes in the last ten years.

Le Mat got its name by the most unusual and possibly the most essential tarot card – The Fool. The Fool is without number (a zero), he is outside of the system and the game, but those adept in the sacred knowledge of tarot know that human soul, when is done with all the earthly roads of every possible kingdom of destiny, comes to zero. The Fool is a card of total freedom and carefreeness. The Fool doesn’t take anyone or anything too seriously, and that’s why he’s the most serious in the bunch. Paradoxical, but it should not befuddle us. The very basis of existence is a paradox. Things become really ours only when we let them go. The Fool knows that, and that’s why he isn’t chasing stuff like money, status, power. And that’s why they can’t take anything away from him. Blessed are the poor in spirit, for theirs is the kingdom in Heaven, says Bible. India’s sannyasins and ancient Greek sages like Socrates are the embodiment of this tarot card. Legend says that one day, when Socrates was strolling down the agora in Athens, he saw many beautiful and alluring things, clothes, jewelry, furniture. He gazed upon them and said: So many things and I don’t need any of it. What we all need in our lives is a little bit of Fool. 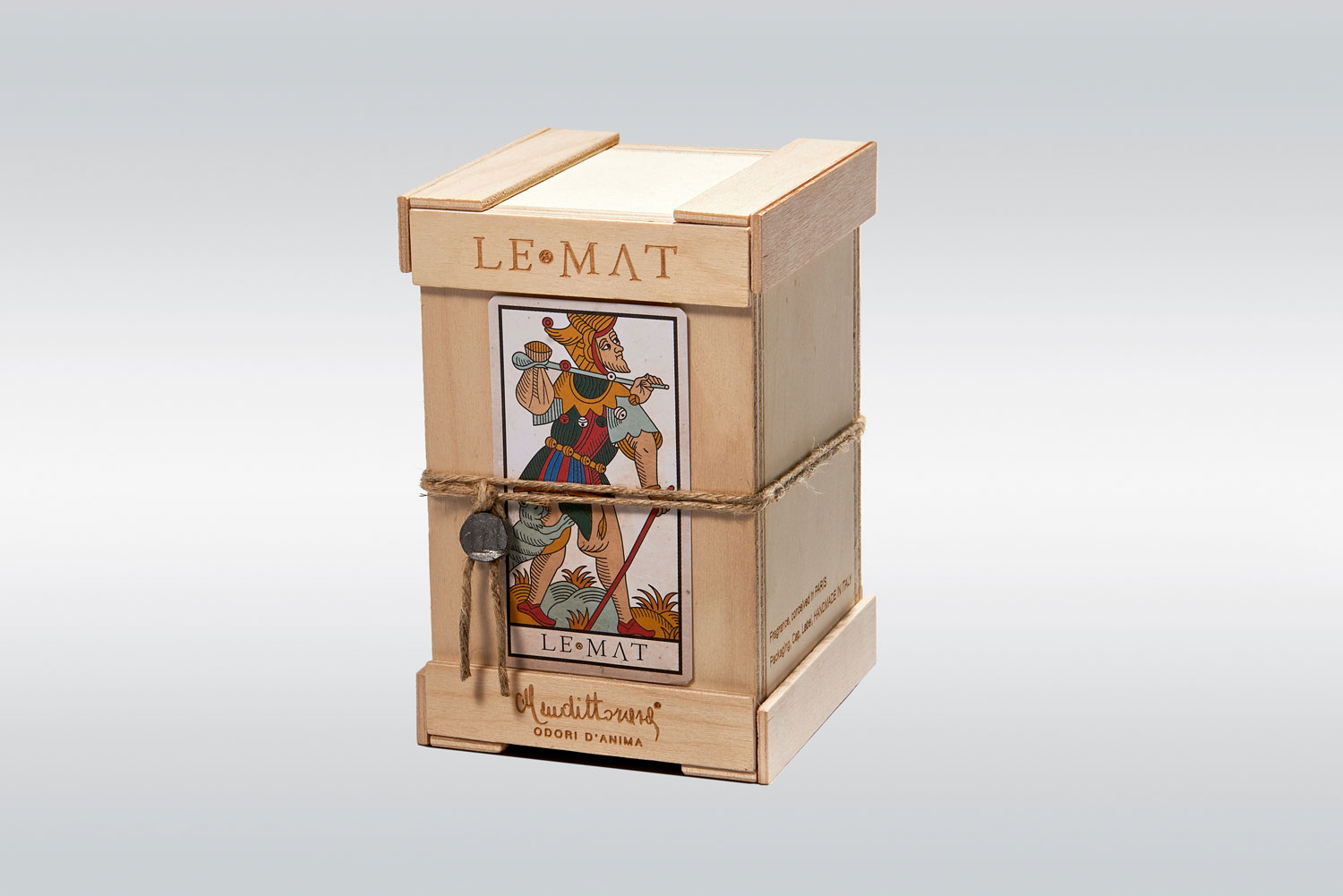 Le Mat can help us with that, scent-wise because it is made on principles opposed to classical, geometrical perfumes. There are two approaches to art, therefore to fragrances as well. One is Orphic, embodied in ancient Greek, Egyptian, and Tibetan art and its goal – harmony. As opposed to that, there is a magical approach to art, one that doesn’t binds and shackles forces, but unleashes and conjures them. That kind of art isn’t rational, proportioned, just, but ecstatic and highly imaginative. Le Mat is a perfume of magic. What is great in it isn’t a perfect structure and ratio of fragrant notes that go from one to another in a logical manner. We enjoy Le Mat with our heart, not our mind. That is what’s great in it, that which sets our emotions free, gifts extasy and invigorates imagination.

Not that the lack of mind, logic and common sense is a defect in itself. There are paragons on both sides. Orphic one is L’Eau d Issey by Issey Miyake, magic one is Poison by Dior. The mind can only be a faithful companion, not the ruler of the heart. We have excellent exemplars from world literature to attest to that. Romeo, as well as Hamlet, only when they go mad, they seem to get to know the real truth. And then we, as an audience, realize that it is not them who are insane, but everyone else. Same is with Le Mat, it’s not he that is the Fool, but everyone else is foolish. When Le Mat sets us free, we finally realize that we are being lied to by all the other perfumes and brands and that they are to ones that are blabbering foolish things, things that drag us further from the essence.

The perfume composition of Le Mat is oriental chypre and is very reminiscent of an old classic Youth Dew by Estee Lauder and Aromatics Elixir by Clinique, a legendary union of patchouli and flowers. In the very heart of the perfume, there are May rose from Grasse and Egyptian geranium, infused with a vibrant mix of spices: nutmeg, clove and pepper. Patchouli from Indonesia and Spanish immortelle provide the base and mend the entire formula. The whole blend is opulent, luxurious, abundant, and sensual. If I could describe it in just one word, I would say – full blooded. Le Mat came in the perfect moment for perfume lovers all over the world, because most of beloved perfume classics from the past, due to recent reformulations, are becoming pale shadows and skeletons of their former selves. But at least now we have Le Mat, that stands before us in pure might and muscle, and smiles, just like The Fool. And we can’t be without him, just as we cannot be without The Fool, same as King Lear, same as the entire perfume industry. When you get a feeling that the whole world went crazy and talking nonsense, The Fool is the one that brings sense back. Le Mat is a zero card in tarot and zero perfume on perfume shelves. It’s practically nonexistent, but without it, nothing would have made sense.

This site uses Akismet to reduce spam. Learn how your comment data is processed.